The River Rats Gather to Dance 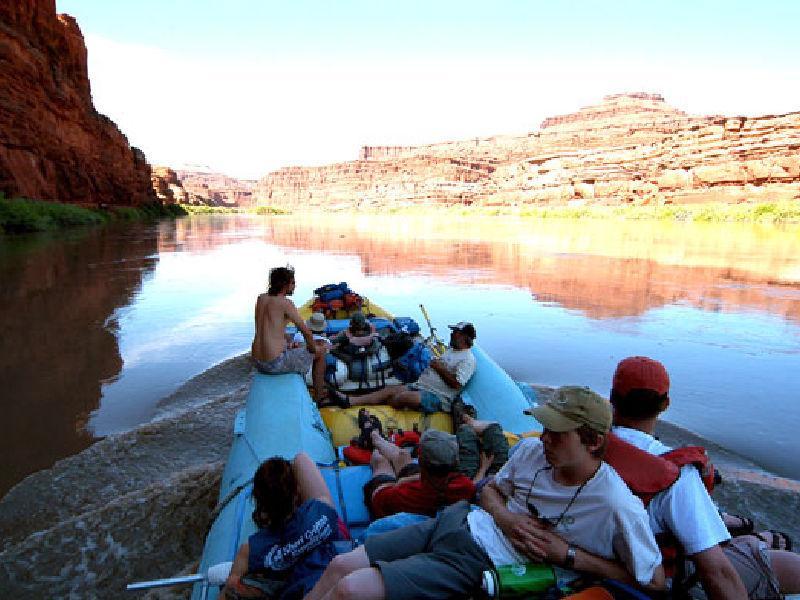 And Coyote Circumcises the Wrong Member By Gretchen and Dan Walsh 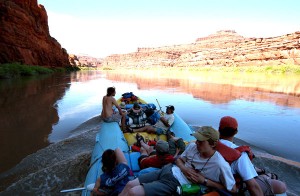 Cataract Canyon – Canyonlands National ParkThis is a long story. So lean back against that rock and fill your cup with something cool. We're on river time here, no matter where you think you are.Coyote is known to be clever, but sometimes he outsmarts himself. He tricks the skunk people, the rabbit people, and the beaver people - but try as he might, he has never put one over on the river rats.Those rats annoyed him. He wanted some of their good food and beer, but they never shared. He also had an eye for the females of that species. But he hated getting wet.One year Father Sky covered Mother Earth with a thick blanket of snow. When the sun grew strong in early spring, the snow melted fast, and the rivers came alive. The water hadn't been this high and strong for years. "Big water in Cataract!" shouted the river rats. All of them, burly or lean, had eyes that read the river, ears that understand her song. They were ready to dance, and River goddess loves to dance. When people step out with her, it is sometimes a waltz, slow and smooth; sometimes it's a jig that leaves her partners limping. River Goddess calls the tune.High up a side canyon, Coyote was loping back and forth in his sideways fashion, tongue lolling out. This time he'd get those rats. He'd trick them, get their good food and beer, and have his way with the women. Only problem: how to stay dry. 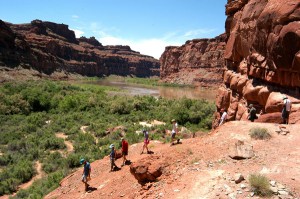 The younger ones had come to learn, the older ones to teach: the river rats assembled. Boss river rat Jose, with a big chest to hold his big heart. He knows the river's song. Jose's son, Arlo, with his laughing dark eyes, learning to read Cataract in high water. Quiet Lor, a reservoir of strength in his slender frame, is listening to the river and understands her song.And with the river rats came others, not knowing what was in store, but soon to learn. Will the river bless them? Time will tell. City people, would-be river rats. So far their dances have been swirling jitterbugs, not flamenco. Are they worthy? They hope so.
And Coyote - always waiting. "Gonna get those river rats, get 'em good this time."As the dancers talked and took each other's measure, Coyote laughed. Silly, all this talk. For him, one good sniff told enough. "Know-nothings, all that good food is wasted on them. Should go to ME!"In the heat of the afternoon, the river gently bore the yellow boats, with just a hint of power in its current, and in the evening, a blue boat brings more dancers. Land people, new to the river, in for a dance they hadn't anticipated.Coyote watched. What a hodge-podge! This was his chance to soak them all, get that food and beer, have some fun. Coyote laughed and showed them all a few tricks. Kicked the rocks around and caused one to sprain an ankle, another to scrape his foot, and kink his back. He stuck out his hairy foot and tripped up a third. She thought it was a root. What fools, thought Coyote, not clever and smooth. I was in and out and never even seen. 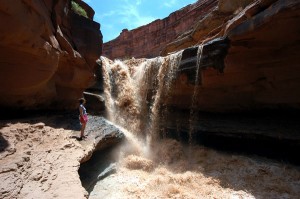 That night the crew broke out the old Coyote stories. He listened, surprised and pleased: perhaps this odd crew wasn't so bad after all. He always enjoyed hearing about how he had arranged the stars. But what was this? They were shouting with laughter. At him! Those stories weren't funny at all. How would any of them like being whacked on sensitive parts with a camas digger! Well - he'd get back at them now. All of them. He'd knock that troublesome one off the boat; she started it, after all. The Big Drops will be the place.Mustn't get wet, though - he hated that. Get that food, that beer, and get those women. Even the older ones weren't that old.Hot sun warms a high riverbank at the end of smooth water. Next morning the dance would begin. Another blue boat arrives, more dancers, led by Arlo, son of Jose. More fathers, more sons, Like Jose and Arlo, learning together, coming to know themselves, each other. (So many reasons for joining the dance.) Breathe deeply, everyone. Cataract is high, and getting higher. The time to dance is in the morning, and Coyote will be waiting.River rat D'Artagnan has come to study the high water, understand its special rhythm with his big deep eyes, keen ears, strong arms. Along to help, to teach, and have some fun, is the seasoned Swamper, kind of like a river bear. You see, river rats aren't all rats. They are bear people, beaver people, fox people, even mouse people, and once they've heard the river's song, they can't stay away. They always come back.Coyote watched, chuckling. They've just met and they think they're a TEAM? He'd show them how good they were. Knock them down, and shake them up. Get all that food, all that beer, and have fun with those ladies. 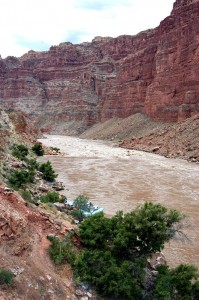 The guides gather on the twilight shore, silhouetted against the pale evening sky, talking quietly to the assembly. "Tomorrow we dance, tomorrow we work. Respect the river, ask for safe passage. Tomorrow night will be the time to laugh, time for the best Coyote stories."
Coyote hears D'Artagnan say this. He's furious. He's really mad now. Gonna get that river rat, then run back to Moab and console the pretty river guide waiting there for him. Coyote will have his way, the sly persuader.In the morning, the last of the dancers arrive from the Big Easy for a river Mardi Gras. They know their river, the Big Muddy, but are they ready for Cataract? Time to find out.In the rapids, time stops moving. Watch the waves, pay attention. Listen to Jose, calling the steps. Move with the river, find the balance, find harmony with the river. Pay attention! High side! River left, river right. Stern first - "High side back there." Bow first. Brown Betty, rapids two and three - all running together. One long rapid, maybe a moment in between. Mile Long now two miles long. Bail, Bail, Bail! Stop, high side left. Pull in, scout. Thunder. Rain. Wait. Twitch.Coyote watches, coyote always watches, but he's excited now. He's also surprised. "Those fools actually look like a team, working together. I'll serve them up a Cataract cafe au lait - frappe! Even if I have to get wet, and oh, how I hate that. Gotta get them, though."Ready for the Big Drops? (Is anyone ever ready for the Big Drops?) Get your grip. Keep your feet out of the frame. Hang on. Left side, Right side, back. Coyote extends his wily hind foot into the maelstrom. "Shit", says Jose, "I've lost my oar." The bailer hears and understands. With one hand each they pop the shaft back in the lock. Jose wheels, powers into the wave, and leads the dance, all in an instant. The river likes his lead and dances back. There's the slot and Jose doesn't miss it. One yellow boat through. One team home. 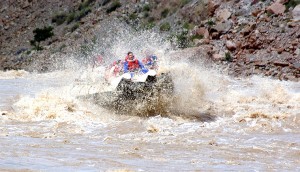 But don't forget Coyote. He sticks out that hairy paw again, and bends back a city slicker's foot, hurts it bad. A yellow boat is coming through. Coyote's eyes are muddy now, and he thinks it's D'Artagnan. Stretches out his foreleg cross the roiling water, and punctures the tube with his razor claw. Got 'em! Got 'em! "Too bad it's Lor. He never laughed at me (at least out loud), the way that D'Artagnan did." But what is happening now? One's in the water, her straw hat floating away. Coyote sees his chance to have some fun, and extends his long-distance member. But she's already being pulled up on another boat. Without even noticing, she whacks him with a solid kick as she hauls herself aboard. OW! OW! OW! Coyote howls, but who hears him in that roar. Can't mess with her.Two others are tossing in the waves, but another is floating calmly. He used the old Coyote champagne cork trick and floats like a balloon. Coyote reached to pull the plug, alas, too late. Already he was half aboard another boat, and just then popped the cork himself (with great force). It hit Coyote square upon his muzzle, and oh how he did wail.Things weren't going as Coyote planned. His nose was sore and his member was bent - might even be permanently kinked. He was wet and really mad. But here's one more yellow boat coming through. This time he knows it's the musketeer. Gonna get him for laughing at him and telling stories. One mighty kick and the boat flipped, sending D'Artagnan and the Swamper into the froth. Seasoned rats, they just grabbed the boat and moved it in to shore. Despite everything Coyote had done, everyone was still all right. Coyote was wet all over now, and the muddy water clouded his eyes, clogged his ears, and his poor nose. Could he still get that swashbuckler? 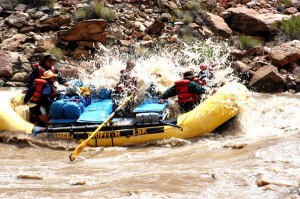 He looked around, and oh HO! What did he see? This could be his chance. I can still settle scores with that river rat, and then run back to Moab for you-know-what. D'Artagnan was on his boat, tying a knot with his member. This is what Coyote thought he saw, but even wily beasts can make mistakes.Coyote sneaked aboard the rangers' boat and made his voice sound like the man in charge. "He's ready. Haul away." Coyote could hardly hold his laughter. And what a sight he was in that hat.The ranger hit the throttle and the rope went taut. It took the tip off D'Artagnan's ---THUMB. Not what Coyote thought it was, because he forgot that coyotes have dewclaws, but river rats have thumbs. Too bad he had so much mud in his eyes. Too bad he was mistaken.Too bad for him, not so bad for D'Artagnan. Bad enough, though. It hurt like hell. Jose was really pissed. He asked the rangers, "You guys take orders from a stupid COYOTE?" They didn't know what he meant, and so drove off, confused.Now it's night, and the river dance is nearly done; only three more rapids tomorrow, and then the river flows smoothly on to Hite. D'Artagnan is home in Moab, in the care of that pretty guide. D'Artagnan of Cataract Canyon will soon be back on the river, and glad Coyote was mistaken. 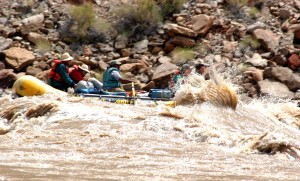 On the river shore, everyone is warm. All the beer and even the box of wine was unloaded still intact despite the dunking, though soon consumed. The master storyteller reads some more Coyote stories. With his many voices, he makes them come alive. Laughter rings. We are warm, we are safe - a little battered. We have danced with the river, and we can tell the tale.Coyote licks his muddy paws. He sure would like that beer right now. But he knows he'll have another chance to get those river rats. Specially that storyteller - he thinks he's so funny. In his bag Coyote has the tip of D'Artagnan's thumb. He thinks he has a trophy, but on the river it is D'Artagnan who laughs and boasts that he's the only river guide in Cataract Canyon with a circumcised thumb.For a brief video of our Cataract Canyon run through Big Drops One, Two and Three, go to
http://www.nps.gov/cany/planyourvisit/upload/2005_Clip5.wmv