The New Game in Town - Mountain Biking in St. George 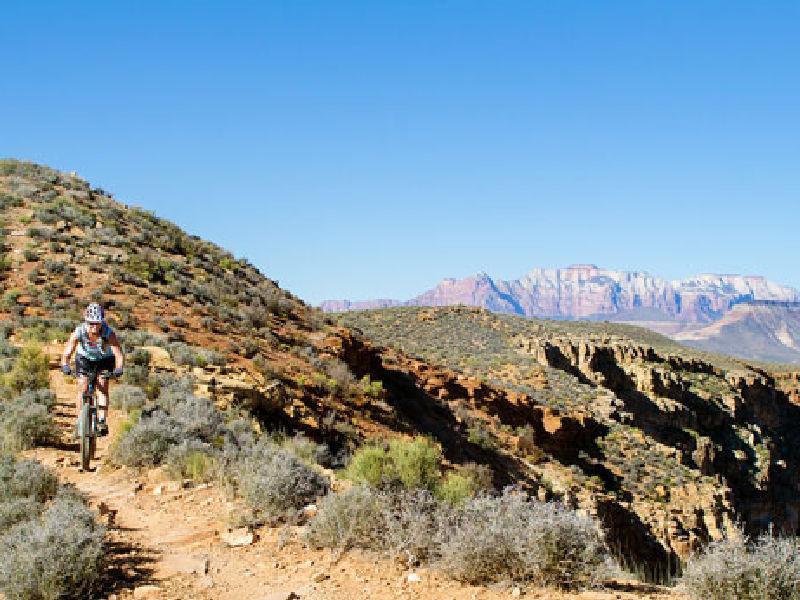 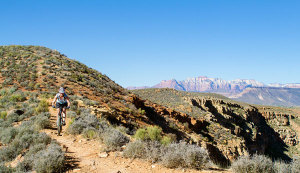 Just a few short years ago, if you asked Utah residents what comes to mind when they think of Southwest Utah, the answer was inevitably, "Zion National Park, sunshine, retirees, and endless rounds of golf." The St. George marathon was occasionally mentioned, but rarely did you hear "world class mountain biking."

That's no longer the case, because the Dixie Mountain Bike Trails Association (DMBTA) has partnered with the BLM St. George Field Office and for the past four years they've been on a trail building blitz. The partnership has added 23 miles of high quality singletrack to the 250 miles that already exist in Washington County.

Mountain biking in this corner of Utah has always been low key, but it's also been an integral part of the outdoor recreation scene for two decades. The riding runs the full spectrum, from steep, technical slickrock to fast, flowing singletrack, and most recently, beginner–level singletrack that everyone can enjoy. The riding is divided into seven main trail systems, but it's easier to think of them as three distinct areas: the Zion corridor, from Hurricane to Springdale; Quail Creek and Red Cliffs, between Hurricane and Washington City; and all the downtown trails.

The Gooseberry Mesa National Recreation Trail is widely considered the prima donna of area mountain biking. Designated in 1999, it has long been an international destination and trail register data reveals visits from 53 different countries. The terrain is slickrock, with white dots marking the highly technical routes that meander across the mesa, similar to the famous Slickrock Trail in Moab.

The only downside to the Gooseberry trails is their difficulty. In fact, many of the trails in the greater St. George area are considered too difficult for beginner riders. DMBTA and the BLM are on a mission to correct this problem, with a goal to make mountain biking accessible to everyone, regardless of skill level.

With moderate terrain that is conducive to fun, flowing, singletrack, the Hurricane Cliffs trail system was chosen to be the recipient of four new trails in the past three years. Long known for the tough 22-mile loop that incorporates the classic JEM, twisty Goulds, scenic Goulds Rim, and ultra-rugged Rim trails, the four new routes fill in the terrain that makes up the blank center of the big loop.

Constructed in 2013, the 5.1 mile Goosebumps trail hugs the toe of the slope at the base of Gooseberry Mesa. Riders flow through the "bumps" as they cross the multiple drainages coming off the mesa. Goosebumps is one of those rare trails that can be enjoyed by experts and beginners alike. The trail splits briefly into A-line and B-line sections in multiple locations. The A-line's are for expert/advanced riders and contain steep drops, jumps, difficult terrain, and even a narrow fin with drop-offs on either side. The B-line is far gentler and is appropriate for beginners. Just make sure you read the signs correctly at the intersections! 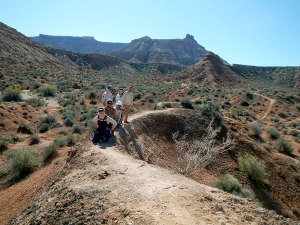 From the midway point on Goosebumps, the Cryptobionic trail makes a beeline downhill toward the Virgin River, winding for 3.6 miles through a series of flowing turns that are perfect for riders just developing their downhill skills. With a gradual drop in terrain, speeds are easily manageable and this trail is just pure fun. "Crypto" ends at the Virgin Dam Trailhead where riders can find a restroom, stone picnic tables, and the intersection with the rugged Rim Trail.

Two other trails were added to the Hurricane Cliffs system early 2015, near the upper end of the popular JEM trail. During the design phase, a dead cow was discovered at the base of a cliff with an ancient cowbell still tied firmly around its neck. With a humorous nod to the classic Will Ferrell Saturday Night Live routine, the "More Cowbell" and "Dead Ringer" trails were born. It is considered good etiquette to watch the SNL skit on your iPhone following your ride.

More Cowbell forms a lazy 3.0 mile loop on a mostly flat mesa with less than 100 vertical feet of climbing, making it perfect beginner-level singletrack. The north end of the trail follows the edge of the mesa with multiple overlooks offering spectacular views of the Pine Valley Mountains to the north and the imposing bulk of Gooseberry Mesa looming to the south.

While More Cowbell is a great addition to the Hurricane Cliffs system and a much needed beginner-level trail, the most ambitious trail to date has to be Dead Ringer. Leaving from the JEM Trailhead just off Highway 59, the 7.6 mile trail makes a gradual descent, winding in and out of drainages and following the contours across steep slopes—really steep slopes. While the riding itself is not particularly difficult, you might want to think twice about riding this one if you suffer from vertigo or are uncomfortable riding narrow singletrack. You don't want to go off trail here. Once off the steep slopes, the trail opens up fast and twisty with a half dozen optional jumps built in.

If things couldn't get any better for the Hurricane Cliffs trail system, the City of Hurricane is planning a new trailhead, complete with singletrack that connects to the Goulds Rim trail. For anyone who's ridden the big loop, that brutally steep dirt road grind will be a thing of the past. This will be a fantastic addition to this popular trail system.

Closer to the population centers of the greater St. George metropolitan area, the Santa Clara River Reserve (SCRR) provides high quality singletrack just minutes from downtown. A joint project between the Cities of Ivins, Santa Clara and the BLM St. George Field Office, The SCRR was created to set aside open space on public lands with a focus on developing recreational trails. The 10-year old project is considered wildly successful, with a full 22 miles of trails that are popular with hikers, trail runners, and mountain bikers. Because of the steep terrain and plentiful switchbacks, the trails are best suited for intermediate and advanced riders. The best part of riding in the SCRR is that within minutes of finishing your ride you can be relaxing in a coffee shop or restaurant in Santa Clara or St. George

In late 2012, a new trail with an ominous name was added to the SCRR. "Suicidal Tendencies" underscores the potential difficulty of the ride and was chosen to make riders think twice before attempting something that might be out of their league. From the top of the switchback-laden Sidewinder trail, "Suicidal" literally drops down a cliff. Riders are greeted immediately by two switchbacks. Miss the first and you're probably okay. Miss the second, and well, you'll understand the name. While this obviously requires advanced riding skills, intermediate riders are a frequent fixture on this trail – they simply choose to walk the short, technical sections.

If you're looking for beginner level riding close to town, the 20-year old Bearclaw Poppy trail is the best choice. Traversing a mix of state and public lands, the poppy trail is named for the endangered Dwarf Bearclaw Poppy which blooms every spring on either side of the trail. The lower two miles of the trail above Navajo Drive in Bloomington are often described as riding a classic roller coaster. This trail is set to receive a major maintenance overhaul in the spring of 2015. 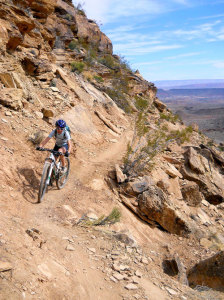 Public lands are not the only locations that have received recent trail construction. Volunteer crews organized by Over the Edge Sports in Hurricane have added new singletrack near Quail Reservoir, on lands managed by the Washington County Water Conservancy District. In addition to the classic Rhythm and Blues and Quail Creek trails, major upgrades and reroutes of existing hiking trails have produced superb singletrack on the rocky terrain. The riding totals 6.5 miles and consists of four connected loops, with each loop topping out on the escarpment that forms the Virgin River anticline and offering spectacular views in all directions. The trail names have a Boy Scout theme, as the original hiking trail alignments were constructed as a scout project.

The new trail additions across Washington County have proved to be an economic driver for the local recreation economy. There are currently 20 companies authorized to conduct mountain bike tours and there are eight mountain bike races and four trail running races held annually on local singletrack.

Local and visiting riders owe a lot to the Dixie Mountain Bike Trails Association. They have proven to be the catalyst for responsible trail construction and have helped made Southwest Utah a must-do mountain bike destination. DMBTA President Lukas Brinkerhoff says it best: "We work to ensure that new single track is being added to our trail networks and also to ensure that all the trails in the area are maintained. We're dedicated to creating and maintaining an awesome riding experience that is unique to Southern Utah. Our goal is simple: Build. Maintain. Ride."

Dave Kiel is an Outdoor Recreation Planner with the BLM St. George Field Office. He is an avid climber, mountain biker, and loves working with volunteer organizations.