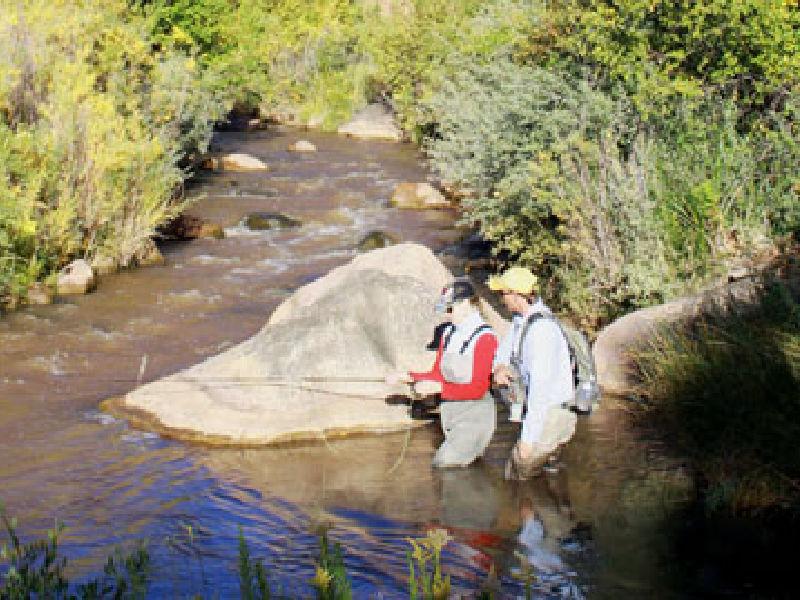 Photos-Monique Beeley Mo, Katiand I were going to fish the area near Capitol Reef National Park with our intrepid guide and good friend, Aaron Adams, from Trout Bum 2 in Park City.  Mo and I fished with Aaron a couple years ago so I was excited to go with him again in another new place.  Aaron was very familiar with the area and wanted to show us public and private water on the Fremont River as well as some of his other favorite spots. Although I am a Utah native, I didn't know much about the area before this visit.  I took the opportunity to do some reading before we went and I learned a lot!  Just a few historical notes:  The Rabbit Valley (Wayne Wonderland ring any bells for the oldsters?) has been a tourist Mecca since the early 1900's.  Capitol Reef National Monument was set aside in 1937; then designated a National Park in 1971.  In 1996, the controversial Grand Staircase-Escalante National Monument was created. The Rabbit Valley is the easternmost interior valley of Utah's High Plateau.   The area was settled by the Mormon pioneers in 1875 when the Richfield Coop Livestock Cattle Company sent their herd to graze.  The cattle and their keepers were soon followed by rustlers from the infamous Wild Bunch/Robbers' Roost gangs, giving the area some of its wild reputation.  The valley is on the western edge of the badlands that edged the Old Outlaw Trail and was also a traditional stronghold of early Mormon thought and practice.  Cattle were not only the oldest, but the most important industry until the advent of tourism. Early our first morning we went to the public access area near the highway.   We hiked for a few minutes between sandstone cliffs, heading east into the sunrise.  The air was crisp and clear--I could see my breath!  I was glad for the warmth of my waders.  When I was packing I had forgotten that we would be at 7000 feet. The land bore little foliage except for right along river's edge.  As we glimpsed the river through the scrub, we saw that it was muddy.  We decided to nymph some holding water to no effect.  I don't know if a fish could have seen the offering if the hook had scratched its nose.   Shortly, we headed back to town to try the private water.  A good choice, Kati hit it big!  If this is what you wish, contact Trout Bum 2 or one of the local guide services in the area to book a trip. A word to the wise:  Most of the Fremont River runs across private land.  As always, know before you go where the boundaries are, because they may not be well marked.  I further recommend that you never fish on private property without the owner's permission.  Almost all of the private sections of the Fremont River could be seen from the main highway, but there is no easy public access.  Don't think you can "sneak on" to this particular river.  The locals are wise to fisherman tricks.  Word has it that fishermen have been hunted down and required to leave by the local sheriff.  (Still preferable to being hunted down by a local owner with a shotgun!)  As I understand it, the first time the sheriff is polite and helpful and takes your name.  The second time, not so:  trespassing fines and confiscated gear. Late in the afternoon Aaron and I headed up for some "pond" fishing at Lower Bowns Reservoir.  We took the kick boats, but when we arrived at the lake the wind was howling and the whitecaps were marching in step.  The water level was low:  the dam was totally out of the water and much of the bottom of the lake was exposed.  In spite of the wind and the low water, we decided to cast streamers from the bank to see if we could find fish.  We worked from south to north, toward the dam. A couple of fishermen passed us walking back from the dam.  They suggested that we skip all the water between where we were fishing and go directly to where they had just finished.  We took them at their word and made tracks for the sheltered and calm section of water directly below the dam.  There were no rises, so we didn't change rigs.  We started blind casting and all of a sudden we were into fish.  They were holding on a color change about 25 feet out from the bank.  We stood in one place for about an hour and caught fish after fish after fish, all on the same streamer, almost on every cast.   And they were hot, pretty rainbows - not giants, but plenty spunky!  They'd get up and tail walk a little, jump once or twice, run behind us and wrap the line around our legs.

After awhile, Aaron got overheated and decided to take a break and I wanted to see if the calm water further east held as many fish so (like an idiot!) I moved.  I spent the next 30 minutes, walking and casting and going fishless.  My fish gurus, Stu and Terry in Dutch John, have told me "never leave fish to find fish," but sometimes I get confused and forget the rules!  I kicked myself all the way back to Aaron, but by then the fish had had enough of us and moved on to points unknown.  We agreed that it was an amazing and memorable hour, probably never to be repeated.   We decided we'd had enough fun for one day and went back to the motel to meet up with Mo and Kati for dinner.


The second morning dawned chilly and bright.  Aaron and I got up early and headed for the public access water on Bicknell Bottoms.  Aaron told me that this water was nothing like the parts of the Fremont we had fished the day before.  Indeed:  the water was glassy, shallow and slow, a total spring creek!  We stood on the road until we spotted rising fish:  they were sipping something I couldn't see in the shady parts of the river.  Aaron picked out the ittiest bittiest flies I'd seen in quite a stretch and we crawled on hands and knees through the weeds and across the marsh to the edge of the creek.   The technique was to kneel and cast downstream to the little guys and feed-feed-feed ‘em line.  And spooky?  I did manage to hook up once or twice but never did land a fish; however Aaron got a couple to the net.   Big fun, but not if you don't like the technical stuff.

Later that same day we jumped across the hills into a neighboring valley and headed south for a small Blue Ribbon creek that Aaron wanted us to try.  The creek was isolated, but was designated public water.  This creek was very small and it held some good fish—all wild! Based on the size of the water, I was pleasantly surprised at the size and abundance of the trout.  Fighting them in such close quarters was pretty hilarious, too.  I should have brought a shorter rod!  The nine footer was definitely not an advantage here.  Oh, well. Live and learn to fish another day. For more information regarding Southern Utah's Wild Trout Streams, see the Utah Division of Wildlife Resources website:   wildlife.utah.gov/fishing
References: Fishing Utah, Brett Prettyman, 2008
The Proper Edge of the Sky, Edward A. Geary, 1992
Roadside History of Utah, Cynthia Larsen Bennett, 1999
Utah Fishing Guide, Steve Cook, 1999 (since revised) www.CapitolReef.travel
www.troutbum2.com
www.RedRiverRanch.com
www.CafeDiablo.net