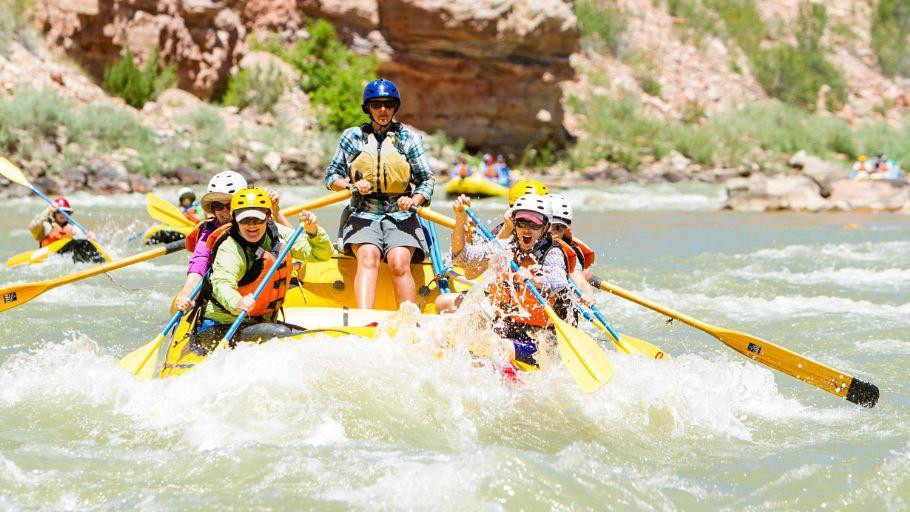 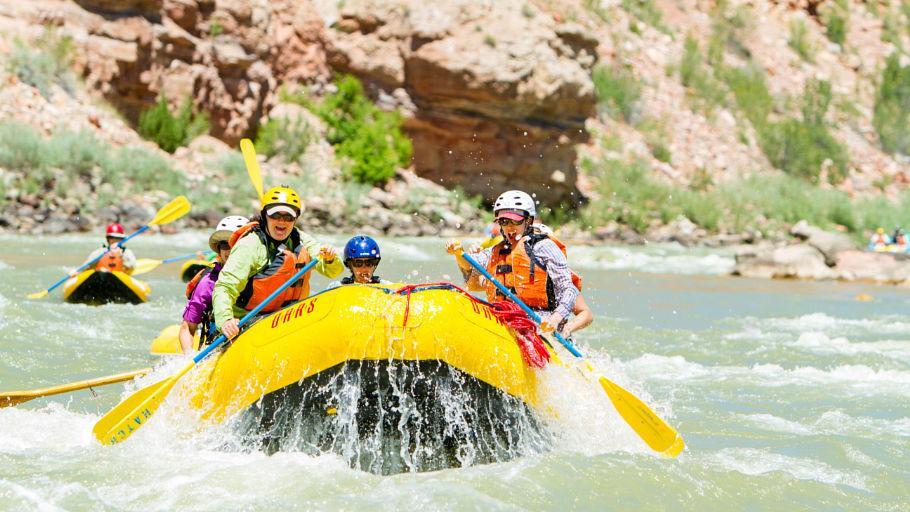 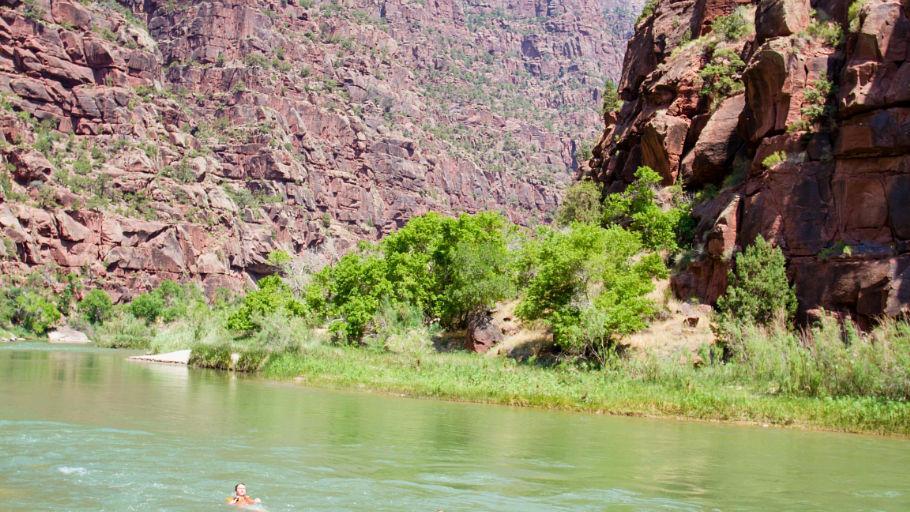 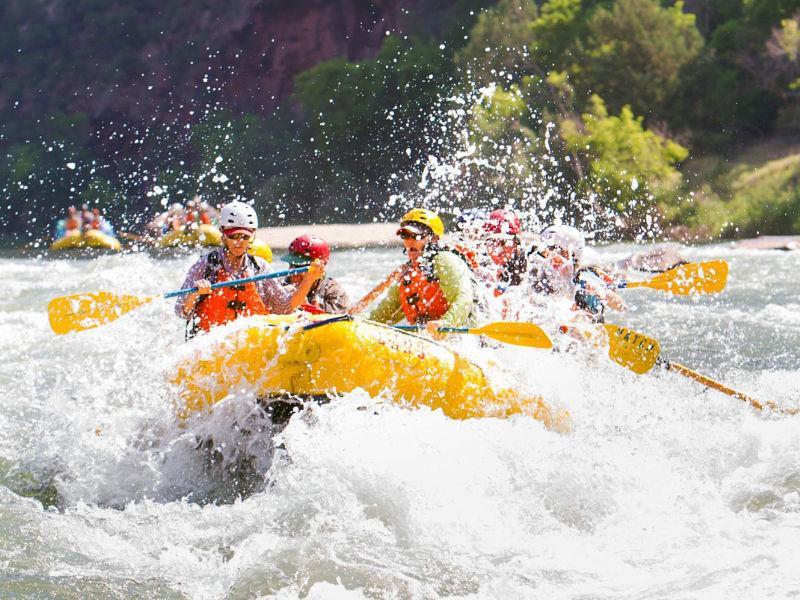 I am forty. When did this happen? As someone who has forever looked and acted younger than my years, forty crept up on me. To mourn this new decade my old roommates, Mo and Julie decided that we three needed a “girl’s trip” to shake from us the ages since we once lived together so long ago. Oh, to be twenty again and living in Park City; where the powder was deep, the beer flowed freely, the male to female ratio was advantageous, and the fears and responsibilities of middle age slept deep beneath the snows of the ski slope.

Mo found us a whitewater rafting trip.  Running The Gates of Lodore on the Green River in Dinosaur National Monument, with class 1-4 rapids, hiking and camping. It wasn't our first thought. Vegas was, and it's smell of cigarettes and clanging slot machines. Then San Diego and its urban heat. And Mexico, where you gambled just as much with the water as in Vegas with its slots. But we wanted more. Something that would remind us again of adventure. We aren't your average girly girls. We've skied first tracks on a powder day. We've rappelled together off a 200 foot arch in the desert. We once celebrated a bachelorette party by hiking to eleven thousand feet. So whitewater rafting? Sure. Let's do it.

I have a hard time unplugging. But I looked forward to trading cell towers for redrock canyons as I answer final emails on my flight over.  I met Mo and Julie in Park City and helped packed up the SUV for the trip.  And we caught up with each other on the drive over. We stayed overnight in Vernal and went to a short orientation with the guides and the other river runners. There was a father/son, two families with kids, a couple, and another group of women probably on their own lady’s trip.

I'm embarrassed to admit it.  The first thing I did when I woke up early on the first day was check my email. The hotel's coffee was simultaneously atrocious and perfect. Next we got on a short bus that took us all to the put-in. The bus ride through Dinosaur National Monument was a couple of hours, but I didn't mind. I missed Utah’s thrusting hills and mountains, the pinon pine that looked so dramatic in the vast deserts that led us all to the Gates of Lodore.

When we got to the put-in, the leader offered us the option to ride in the big oar boats with the guides or to take your own ducky.  It's just an inflatable kayak with a cute name (wait till you hear what they call the portable toilet*). Mo chose the big boat so she can take photos of Julie and me in the ducky. The first section of the river is just class 1 and 2 rapids; ripples and splashes. And the guides kept yelling “right,” but we couldn't figure out if they meant paddling on the right or to steer right. Julie is an engineer, and I work for a large tech firm, so we might have over-analyzed it, but we seemed to bounce off every large rock in the rapids. This young boy in his own ducky made us look foolish as he passed us in a near-perfect path through the rocks.  Like skiing slalom course. It was much easier after we decided to follow him. Towards the end of the day we got in the big boat for the class 4 rapids. But the young boy with the near-perfect path stayed in his ducky, and we all cheered him on as he slipped through the rocks like an otter in a stream.

The first night's camp was such a relief to our screaming muscles. The guides started on dinner while we pitched tents a pulled up camp chairs along the river. Everyone talked and made friends as we watched the sun sink while savoring a gin and tonic. The kids were creating memories they would share with each other one day when they themselves turned forty. And then, seemingly out of nowhere, dinner was served; chicken fajitas, rice & beans, salsa with box wine served beneath more stars than you knew existed. The light from far above shone down on us while we laughed, talked and sipped our drinks happily until sleep stole over all.

That’s your alarm clock and all you have to do is roll out of your tent. I found a camp chair along the river and just took it all in. When was the last time I thought about work? Ugh, that just ruined my streak. Well, time for breakfast and another day on the river! Today was a half day on the water and a half day hiking. While the rapids were action packed on day one, they smoothed out on day 2. And it gave us valuable time to get to know the river. The walls of the canyon snuggle so close along here. One of the guides said the Yampa River Canyon was a million years old! And hosted Indians, and the exploits of explorer John Wesley Powell.

After lunch we hiked to a place called Butt-Dam. The hike was a breezy 2.5 miles along a creek before we got to the Dam. The way this dam works is one person hangs out at the bottom of a waterfall while everyone else climbs up the top of the falls and sticks their butt in the stream of water.  With about ten people you can successfully stop the stream of water and let it pool behind the butt of the last person in line. You count to 5 and you all stand up at once sending a 100 gallons of ice-cold water onto the person below! Fun and games on the river. On the canyon walls were many petroglyphs, ancient drawings of people and goats from thousands of years ago. And I wondered how long ago people have been sticking their butts in the dam. My friends and I had such a great time that the guides had to chase us down on the way back to ask us to stay with the pack. Reportedly there were bears in the area.  “Bear!”, I scoffed, “I'm not afraid of bears!”  Though later, I was forced to change my mind.

Cocktails were in order when we got back to camp, and another relaxing evening on the river banks with yet another river-gourmet dinner, wine and a massive campfire. I shared a tent with Mo, and Julie was in a single next to us. Sometime in the middle of the night, Mo shook me awake. “There's something outside our tent!”

The hair on my arms stood up. I heard a scratching, shuffling, and sniffing sound. Mo was braver than I, and found her flashlight. I sat frightened and shaking as she slowly opened the zipper. What about Julie? What do we do? There! In the light! And it tore off in the dark.

Wait a second. Bears don't have fluffy white and black tails. Sure enough the next morning we saw lots of paw prints from our frightening skunk. I bet he was adorable and I'm embarrassed at how terrified I was.

The last two days we fell into the groove of a slower life, morning coffee, magnificent canyon formations, and action-packed rapids. There were more hikes several to hidden pockets of Native American artifacts. And always there were cold, rushing falls.  Evenings were spent in front of the camp fire with delicious food. I reconnected with my girl-pals. And I fell in love with the river.

Now, there's a few things from this trip I want as part of my daily routine; coffee alarms, starry nights, camaraderie and visiting the groover* next to a river (some call it a Loo, or water closet, but on the river it’s a groover). But I also reconnected with myself. And I realized that the constant connection with work was brought on by my need to feel needed. But more importantly, I learned we should do a girl’s trip every year.  Next year is coming up quick. After all, we're going to be 41!