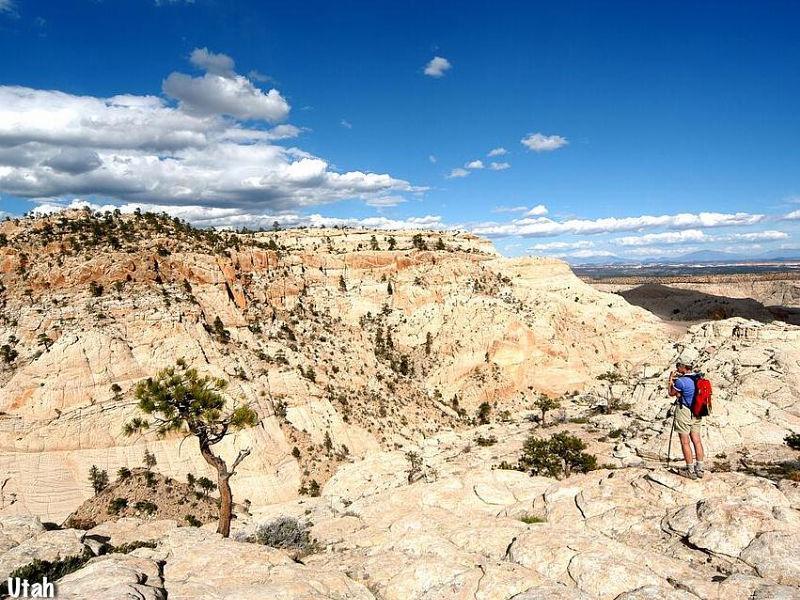 Grand Staircase-Escalante National Monument (GSENM) spans nearly 1.9 million acres of some of America’s most remote and ruggedly beautiful public lands. From its spectacular Grand Staircase of cliffs and terraces, across the rugged Kaiparowits Plateau, to the wonders of the Escalante River Canyons, the Monument’s size, resources, and remote character provide extraordinary opportunities for geologists, paleontologists, archeologists, historians, and biologists in scientific research, education, and exploration.  GSENM is administered by the Bureau of Land Management (BLM) as part of the National Landscape Conservation System. President Bill Clinton designated the area as a national monument in 1996 using his authority under the Antiquities Act. Grand Staircase-Escalante encompasses the largest land area of all U.S. National Monuments.
There is very little infrastructure in the monument and the BLM intends to keep it that way  Only two paved roads are within GSENM - one US89 from Kanab, Utah to Page, Arizona on the southernmost end, and the other UT12 from Bryce Canyon City to Boulder bordering the north.   There are a few backcountry roads with traveler’s advisories in effect almost always.  Only one developed campground.  No motels, restaurants, shops and very limited cell service.  However, plenty of permitted guide services for hiking, pack trips, canyoneering, backpacking and photography.  The BLM has Visitor’s Centers in Kanab, and Big Water on US89 and in Cannonville and Escalante on UT12.  Kanab has several fine lodging properties, a variety of good restaurants and one of Utah’s best outdoor gear shops.  Panguitch has several motels and an old west Main Street. Smaller Escalante has very good, although limited lodging, eateries and shops.  VisitSouthernUtah.com  BryceCanyonCountry.com